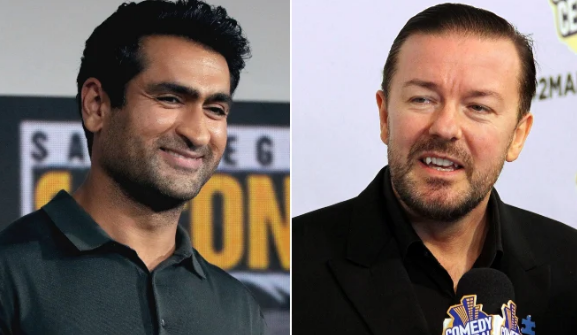 Actor and comedian Kumail Nanjiani are calling out Ricky Gervais and blasting him over his ‘offensive’ take on comedy.

The Oscar-nominated actor blasted Gervais, 59, who is known for calling out celebrities with an offensive twist to his comedic ways, saying he has been ‘normalizing harmful ideas’.

Speaking at the comedian round table with The Hollywood Reporter, Gervais confessed that he was taken aback to see that people believe “a joke is a window to a comedian’s true soul.”

“A big part of my comedy is saying things that I do not mean. I say the wrong thing because I know the audience knows the right thing and that’s why they laugh,” he went on to say.

“I’ll change the joke halfway through, I’ll pretend to be right-wing, left-wing, no wing if it makes the joke funnier. People who think I’m going to change the world with a gag are really delusional,” he added.

Nanjiani asked Gervais how he feels when people assume the things he says on stage is how he actually thinks.

Gervais responded saying: “The fact is if I play to 15,000 people, there are going to be rapists, pedophiles, murderers… That someone might take you at face value doing an ironic joke or a satirical joke, well, yeah, some people try to inject themselves with bleach. There are stupid people in the world.”

Nanjiani went on to argue: “But if you’re making some sort of joke where obviously you don’t believe it, but the point of view of the joke is that it’s good that these people are marginalized, I do think that can normalize ideas that would otherwise societally be considered harmful.”

2020-07-04
Previous Post: Penn Badgley confesses to the use of drugs during his ‘wild’ early 20s
Next Post: Kanye West says he is running for president