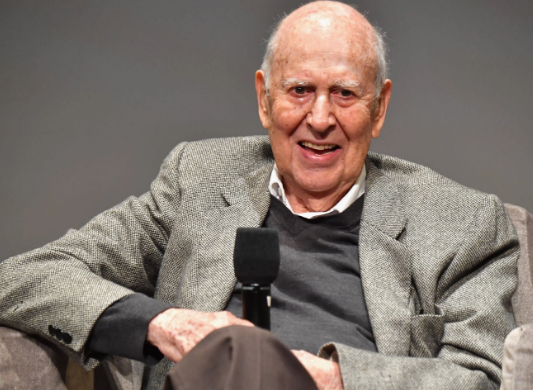 legend of Comedy Carl Reiner passes away at 98

Carl Reiner, a revered and versatile comedy entertainer who won nine Emmies and stayed active into the 1990s with roles in movies such as the Ocean’s Eleven  franchise, has died at the age of 98.

Showbiz friends of the writer, actor, director and producer confirmed his death, which news reports said came Monday night of natural causes at his home in Beverly Hills.

For many Americans, the Bronx-born Reiner was perhaps best known for the 1960s TV sitcom The Dick Van Dyke Show, which he created and performed in as an irascible comedian. It won five Emmies.

In his early years Reiner worked with comedy legends such as Syd Caesar and Mel Brooks, a close friend. In one hugely popular skit with the latter, Reiner played a straight man interviewer to Brooks’s 2001 Year Old Man.

In later years his film credits as director include Oh God, starring George Burns, in 1977; The Jerk, with Steve Martin in 1979; and All of Me,  with Martin and Lily Tomlin, in 1984.

The father of director and activist Rob Reiner, Reiner Sr. did other movies with Martin, including “Dead Men Don’t Wear Plaid” and Man with Two Brains.

In 1995, Reiner received the Writers Guild’s lifetime achievement award for a career in TV writing. In 2000, he won the Mark Twain Prize for Humor, presented by the Kennedy Center.

Just three days before his death, Reiner tweeted a message of gratitude for the full life he had.

“Nothing pleases me more than knowing that I have lived the best life possible by having met & marrying the gifted Estelle (Stella) Lebost – who partnered with me in bringing Rob, Annie & Lucas Reiner into to this needy & evolving world.”

Condolences for Reiner poured in, including a tweet from New York governor Andrew Cuomo.

“Carl Reiner, Bronx born and bred, made TV comedy that endures to this day. He made America laugh — a true gift,” Cuomo wrote.

“My friend Carl Reiner died last night. His talent will live on for a long time, but the loss of his kindness and decency leaves a hole in our hearts. We love you, Carl,” Alda tweeted.

2020-07-01
Previous Post: Legendary actor and TV host Tariq Aziz Passed away
Next Post: getting back Brad Pitt and Angelina Jolie together?