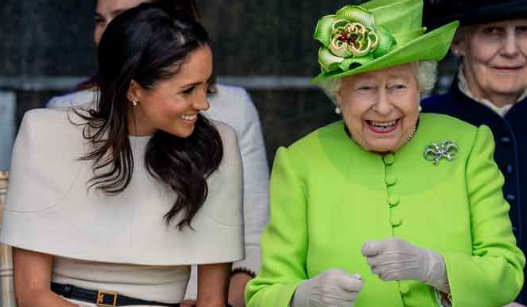 Queen Elizabeth reportedly ‘burst out laugh at’ when she opened  Christmas gifts from Meghan Markle in the year of her engagement to Prince Harry.

In 2017, Meghan spent Christmas with the royals for the first time. Her  gift, she gave to the Queen that year, reportedly  left the monarch in fits of giggles.

The former ‘Suits’ actress was invited to celebrate Christmas with the royal family just one month after she and Prince Harry announced their engagement.

Prince Harry’s sweetheart joined the royal family for the first time at Sandringham  during their annual walk to the St. Mary Magdalene Church on Christmas morning that year.

Meghan, as it seems, also joined in with the royals’ tradition of giving one another impractical joke gifts on Christmas Eve  she gave the Queen a present, which the monarch reportedly found ‘hilarious’.

Meghan Markle, according to a media outlet, gifted the Queen with a singing hamster toy, which apparently made the monarch ‘burst out laughing’.

Some royal fans still want to see Meghan, Harry, Queen and other royals in the same spirit, hoping they all would be soon  reuniting and enjoying quality together  to  put all the rumoured rift aside.

The Queen will be spending the festive period ‘quietly’ at Windsor Castle  with Prince Philip, breaking with their 32-year tradition of spending the holiday at Sandringham.

Meghan and Harry are celebrating this Christmas in their new Montecito mansion with their son Archie and few friends.