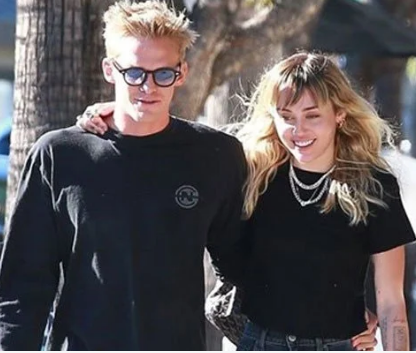 Singer Miley Cyrus is very grateful to have Cody Simpson in her life as he very much into clean and healthy living and has reportedly been helping her.

A media outlet, citing a source, reported: Cyrus is very happy to be dating Cody. He is very much into clean, healthy living and supports her sobriety. They are a great couple.”

Last week, the ‘Wrecking Ball’ hitmaker explained: “I’ve been sober for the past six months. In the beginning, it was just about this vocal surgery. But I had been thinking a lot about my mother. My mom was adopted, and I inherited some of the feelings she had, the abandonment feelings and wanting to prove that you’re wanted and valuable.

She added: “My dad’s parents divorced when he was three, so my dad raised himself. I did a lot of family history, which has a lot of addiction and mental health challenges. So just going through that and asking, ‘Why am I the way that I am?’ By understanding the past, we understand the present and the future much more clearly. I think therapy is great.”

Miley also revealed that she was worried people would think she was “no fun” when she was sober but the benefits to her lifestyle have been huge and she wants it to continue.