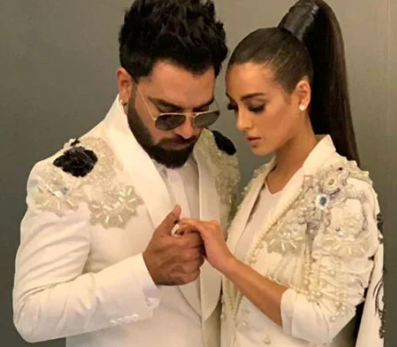 By: Rana
In: Uncategorized
Tagged: by storm with, Iqra Aziz and Yasir Hussain, News, Pakistani star, their proposal, took the world
With: 0 Comments

Famous Pakistani star couple Iqra Aziz and Yasir Hussain took the world by storm with their proposal at the Awards (Lux Style 2019) , many were quick to criticize and rebuke the duo over their public display of affection.

However, amongst those critical of the apparent ‘uncultured’ behavior, Iqra’s actual parental guardian, her mother was not included.

According to the 21-year-old ‘Suno Chanda’ actor’s sister Sidra Aziz, her mother had been entirely baffled with the idea about why some had to rain on other people’s parades.

Turning to Twitter, Sidra stated: “My mom on whatever has happened with LSA night: Itni nafrat logun ne comments me dali hai, mujhe samajh nahi ata hamarey log doosrun ki khushi me khush nahi hotey, ghussa karte hain. [There is so much hate in the comments, I am unable to understand why our people rather than being happy in someone’s happiness are irritated instead].”

Earlier, the power couple had raised a lot of eyebrows after they were spotted embracing each other following the proposal.