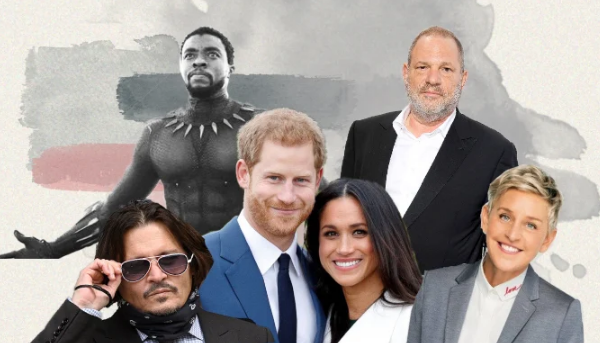 Scandals, deaths and lawsuits – Hollywood’s turbulent 2020 in a nutshell

By: Rana
In: Uncategorized
Tagged: deaths and lawsuits, Hollywood’s, in a nutshell, News, Scandals, turbulent 2020
With: 0 Comments

The terrifying 2020 began not just with the coronavirus pandemic but a number of big stories hit the headlines this year, sending shock waves across the globe.

From high-profile lawsuits to sexy assault and abuse allegations, 2020 sullied the names of a number of stars and turned life completely upside down for others. It also took away some notable stars from the world

As the whirlwind year wraps up, let’s take a look back at all the tumults it brought with it:

Harry and Meghan, officially known as the Duke and Duchess of Sussex, surprised the rest of the royal family in January by publically announcing they wanted a “new working model” that would allow them to spend more time in North America and to be financially independent. They have since moved from the UK to California to lead non-royal lives with their son Archie.

Basketball legend Kobe Bryant, 41, and daughter Gianna, 13, were amongst the nine who passed away on January 26 following a helicopter crash. The athlete was on his way to a basketball game with his daughter and seven other passengers and crew when their Sikorska S-76 helicopter slammed into a rugged hillside in Calabasas, west of Los Angeles. There were no survivors.

Former Hollywood pair, Jennifer Aniston and Brad Pitt had wreaked havoc after they had an in-person encounter with cameras flashing all around them at the 2020 Screen Actors Guild Awards. The internet ‘broke’ after the former flames embraced it out backstage and were photographed together for the first time since their divorce in 2005.

However, that wasn’t the end of it. The exes came together for a second time this year, sending fans in a tizzy after they participated in Dane Cook’s Feelin’ A-Live virtual table read for Fast Times at Ridgemont High.

Former Hollywood producer Harvey Weinstein was convicted of sexual assault by a New York jury in February but was acquitted on the most serious charges that could have sent him to prison for the rest of his life. Weinstein, 67, was convicted of sexually assaulting former production assistant Mimi Haleyi in 2006 and raping Jessica Mann, a one time aspiring actress, in 2013. He faces up to 25 years in prison on the sexual assault conviction.

American actor Lori Loughlin and her husband designer Mossimo Giannulli were found guilty of paying one-half a million dollars to get their daughters admitted into the University of Southern California. The Full House actor after turning herself in back in October served two months behind bars as part of her sentence.

Back in April, a Twitter trend against talk show host Ellen DeGeneres had come afloat where her past workers and those who had met her, recounted their unpleasant experiences with her, dubbing her as ‘one of the meanest people alive.’ Meanwhile, her crew members from The Ellen Show also came out later this year, complaining about a toxic workplace environment. Following the slew of allegations, WarnerBros launched an investigation against the host and the show’s producers.

The United States was shaken up after the death of a Minneapolis man, George Floyd who was killed aft former police officer Derek Chauvin knelt on his neck for eight minutes.

Following the death of Floyd, the Black Lives Matter movement gained momentum across the globe while the who’s who of Hollywood also came forth to show solidarity to the black Americans.

Former girlfriend and procurer of late convicted pedophile Jeffrey Epstein, Ghislaine Maxwell was taken into custody on July 2 by the Federal Bureau of Investigation. She was slapped with charges of transporting a minor for the purpose of criminal sexual activity.

American actor Naya Rivera’s body was recovered near Lake Piru in California days after she went missing on July 8. The Glee star had gone swimming at Lake Piru with her four-year-old son Josey Dorsey. While the actor lost her life, her son was later found asleep on the boat, covered in a towel.

Hollywood star Chadwick Boseman passed away on August 28, 2020, at the age of 43, after a four-year struggle with colon cancer. The news was confirmed through the actor’s Twitter account where the Marvel star’s family released a statement.

“It is with immeasurable grief that we confirm the passing of Chadwick Boseman. A true fighter, Chadwick persevered through it all, and brought you many of the films you have come to love so much,” his family said in the statement.

Hollywood star Johnny Depp lost his libel trial against British tabloid over ‘wife beater’ claims in November aft High Court Judge Andrew Nicol dismissed the 57-year-old’s claim saying the newspaper group’s article had been proven to be “substantially true”, adding “the claimant has not succeeded in his action for libel”.

The actor sued the tabloid’s publisher News Group Newspapers (NGN) and the author of the article over lay claim he was violent to ex-wife Amber Heard during their volatile two-year marriage.

2020-12-31
Previous Post: Prince Harry, Meghan Markle get endorsed by Princess Eugenie with her subtle move
Next Post: British hip-hop star MF Doom passes away at the age of 49