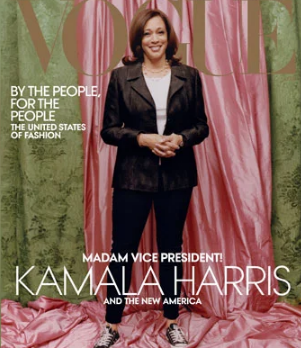 Vogue Magazine has been accused of “whitewashing” photos of its February cover star Kamala Harris after it took to Twitter to share the photos.

In the tweet, the publication posted two contrasting photographs of the US vice-president-elect in which one of them was a full-length shot with a glossy, pink drape, which drew criticism.

According to users, the cover seems like a half-hearted attempt at portraying America’s first female vice president.

“Kamala Harris is about as light skinned as women of color come and Vogue still [expletive] up her lighting,” one wrote.

“Vogue. Not only did you choose to disrespect VP Elect Harris you picked a much worse picture. That photo with the pink and green is a mess. You had an opportunity to lift Kamala up and instead knocked her down. It’s not even consistent with her image. Inexplicable. Badly done,” another user wrote.

“Mad choice. Reissue a new cover and apologize. The greatness of the Vice President will be tested soon enough in her actions but please let’s start with the cover photo her office approved,” another wrote

“Anna Wintour must really not have black friends and colleagues. I’ll shoot shots of VP Kamala Harris for free using my Samsung, and I’m 100% confident it’ll turn out better than this Vogue cover,” he said.

This is not the first time Vogue received flak for inaccurately portraying black stars.

The August edition featured athlete Simone Biles in its US cover and received a similar amount of criticism over the fact that the photographer did not do justice to her.